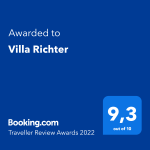 Villa Richter is a real gem of Art Nouveau architecture in Międzyzdroje. The elegant holiday residence was opened by the owner of the furniture factory from Szczecin, Max Richter. An architect Schloss from Szczecin designed a construction project in 1907. Soon after local authorities issued building permits and next year, at the coastal promenade, a beautiful villa arose and was ready to welcome its first guests.
For Międzyzdroje it was a time of intense change – in the 13th century, in the area of today’s city, there was only a tavern inn. Until about the 16th century Międzyzdroje was a small fishing village with just 8 families. The moment of breakthrough was in 1832, when the growing popularity of seaside tourism changed the modest settlement into a renowned summer resort and spa. At the turn of the 19th and 20th centuries, a lot of representative hotels and guest houses were built in Międzyzdroje. Most of such buildings were erected at the promenade by the sea.

Initially, vacationers in Villa Richter could choose whether to stay in single rooms with the option of 24-hour catering or in two-room apartments with kitchen. In the mid-1930s, was sold to Klingensberg siblings – the owners of two neighboring residences. After the end of the Second World War Miedzyzdroje received city rights while Villa Richter was taken over by the State Treasury. From 1948, the facility was managed by the Workers’ Holiday Fund. At the beginning, there was the Holiday House Huragan, after some time renamed to Holiday Home „Rybitwa I”.

Since 1995 Villa Richter has been private. On the initiative of the owners, the building was renovated to restore it to its heyday. In 2016, the villa was bought by new owners, who caused further changes. The building has undergone a major renovation including a creation of a new, comfortable apartment on the ground floor. The convenience of guests has also increased by installation of the lift.

Villa Richter distinguishes itself with an octagonal tower in the north-east corner, covered with a bell-shaped helmet with a spire and a flag, on which the construction year of the residence is written. The passers-by also enjoy a richly decorated elevation, with gilded cornices and stylish decorations, in which floral and plant motifs dominate. Particularly noteworthy are two peaks, on which seven-branched stars in floral wreaths are placed.